Have you ever watched and/ or consciously paid attention to your tongue when you talk or eat? Since the Nair’s collaborative research of the Low Mandible Maneuver and Its Resonential Implication for Elite Singers (JoV 2016), Angelika Nair has pioneered the use of the ultrasound (US) in the voice studio as a way for students to study their own tongue behavior during phonation.

Using ultrasound, the tongue can be seen in real time on the screen as the singer sings, which makes it a powerful tool in the voice studio.

However, being able to maneuver the tongue more deliberately is not only useful for singers but also actors, clinical settings and the language classroom.

Many voice users (that includes singers, actors, teachers, coaches, therapist etc.) and scientists are in agreement that the tongue is a crucial part in singing as well as speaking. Yet, there is no literature that solely addresses that organ and its acoustical influence in the context of a technique; in other words, how can I manipulate/execute it for my purpose and why? what all does the tongue actually effect/ influence? Furthermore, instructions such as “move the tongue forward”, “move the tongue back” or “put the tip up” are still commonly used. However, considering the tongue’s anatomy, physiology, and biomechanical features, these instructions, while well intended, they are rather misguided and unfortunately, can even have counter-productive effects.

The tongue is one of the most malleable organs in our body and solely comprised of muscles, which enables it to retract and extend at the same time. As fascinating as this is, it is also one of the main reasons – because of the interconnection with the entire vocal tract, why it is so difficult to deliberately maneuver it without resulting in rigidity in both the tongue and the larynx. 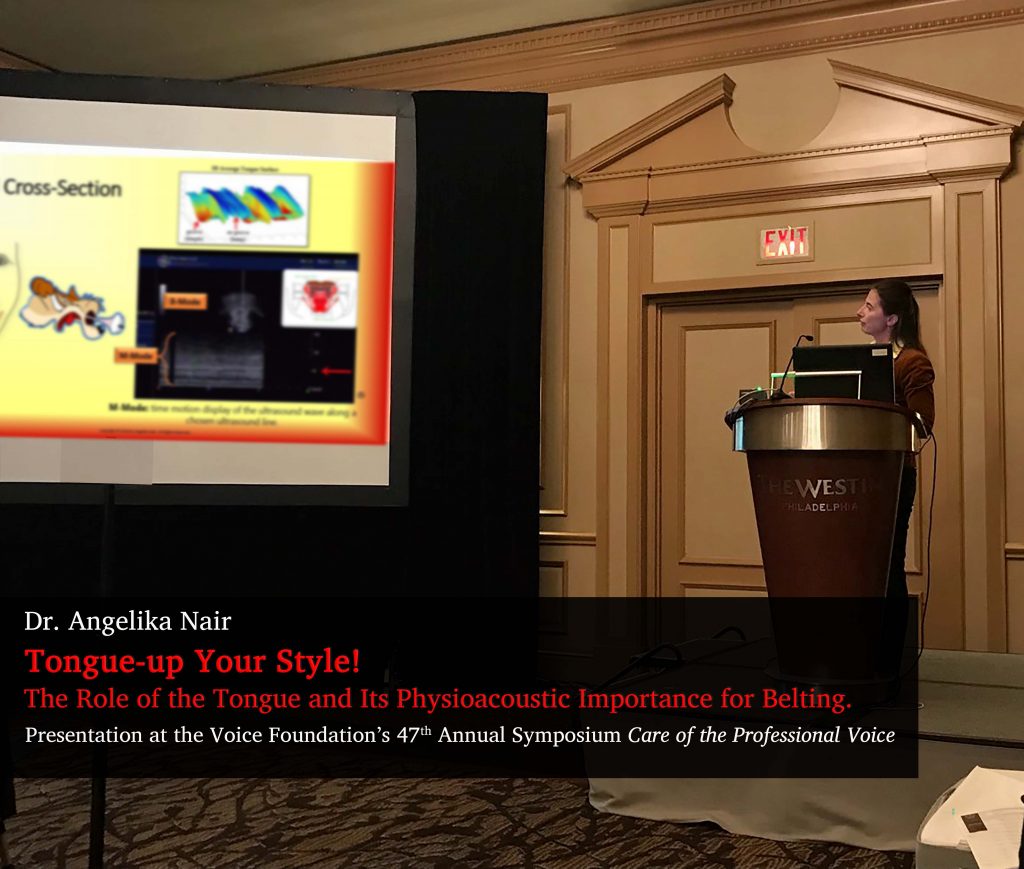 By working with US and imagery derived from US, Angelika Nair has found a regiment of exercises combined with step-by-step instructions and pedagogical tools that help accelerate the learning of various vocal strategies (physioacoustic) and improve the multitudinous challenges of sensory awareness, flexibility and control within the tongue.

However, tension in the tongue is not only due to the tongue. Which is why additional focus will be payed to other body mechanics, such as head, neck and jaw, by starting with proper body posture. Exercises and strategies combined with principles from various methods of conscious control and awareness in movement will help free the tongue, body, mind, and ultimately the voice.

A vast majority of the technical problems in the quest for great diction with luxurious tone occur when singers combine vowels and consonants. No matter how beautiful our tone is when singing vowels, if we then access the speech template for inadequate consonants, the vowels will surely suffer as a consequence. Consonants carry much of the burden of dramatic interpretation in singing. However, because they are mostly executed at virtually the same speed whether spoken or sung, the singer needs to modify them to have much more resonance and amplitude than those in speech.

This research – which is in part piggybacking on the data from The Low Mandible Maneuver – as well as the spectrograms of the great singers do show areas of resonance in the consonants that suggest the same vocal tract set that they use in their spectacular vowels. The research was presented at 45th Annual Symposium: Care of the Professional Voice June 5, 2016 and employs videos, acoustic analysis (spectrography) and stop-action imagery to illustrate the importance of consonant resonance (CR) as well as on how to maneuver the tongue for best results through the biofeedback of ultrasound.